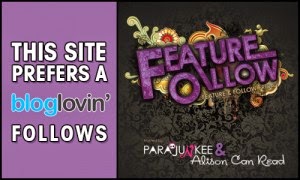 Hosted by Parajunkee and Alison Can Read

What is your favorite TVseries that you can watch over and over again on Netflix?

Book Review: The Queen of the Tearling by Erika Johansen 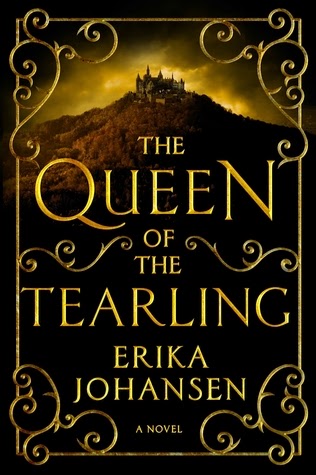 
Kelsea Glynn is the sole heir to the throne of Tearling but has been raised in secret by foster parents after her mother - Queen Elyssa, as vain as she was stupid - was murdered for ruining her kingdom. For 18 years, the Tearling has been ruled by Kelsea's uncle in the role of Regent however he is but the debauched puppet of the Red Queen, the sorceress-tyrant of neighbouring realm of Mortmesme. On Kelsea's 19th birthday, the tattered remnants of her mother's guard - each pledged to defend the queen to the death - arrive to bring this most un-regal young woman out of hiding...

And so begins her journey back to her kingdom's heart, to claim the throne, earn the loyalty of her people, overturn her mother's legacy and redeem the Tearling from the forces of corruption and dark magic that are threatening to destroy it. But Kelsea's story is not just about her learning the true nature of her inheritance - it's about a heroine who must learn to acknowledge and live with the realities of coming of age in all its insecurities and attractions, alongside the ethical dilemmas of ruling justly and fairly while simply trying to stay alive...

This is such a hard review to write. I finished this book Sunday(?), I think... I let it sit for a few days because I just didn't know how I felt after reading. And now 4 days later I still don't know how I actually feel about this book. Honestly, it ended up being nothing that I was expecting! Young adult? Definitely not. Romance? Not a bit. Set in the middle ages? Nope. After finishing the first chapter I read some other people's reviews to see if I wanted to continue (and maybe help me understand what was going on!) I am so glad I did. After all, I really, really wanted to like this book!

I decided to keep going with this and that was an excellent decision. Around chapter 4 I began to really get into the story and I knew 100% I wanted to finish this thing. Let me just say, if I were rating this on the writing quality alone I would definitely give it a 5. Even though it took me much longer to read than the average book of this length, I still enjoyed the journey. The prose is gorgeous and I appreciated the attention to detail and imagery. The setting left me with a million questions, but after reading interviews with the author I can totally understand why she did it this way and those questions are why I will be reading book 2.

I may be in the minority here, but our main girl, Kelsea, was not my favorite character. I liked her and all, trust me (anyone who loves books that much is fine by me), but I loved the male supporting characters, especially Mace and I was pretty interested in the Fetch, too. BUT, there wasn't a stitch of romance in this thing! Usually that's a deal breaker for me. But seeing as I did not know there wouldn't be romance until half way through the book, I sucked it up and got over it. And you know what? I still enjoyed it! That's not to say I'm not hoping for a little bit of lovey-dovey stuff in the future, because I totally am, but if the author decides not to, well, oh well. (There's definitely two, maybe three guys I'd root for her to be with!)

So yea, I liked this book. I read the last page and asked myself, "Am I going to read the sequel?". I really had to think about it for a minute or two but my final decision was a "yes". I may not be fully invested in Kelsea's story yet, but I am invested in her world. I found it fascinating and I am crazy curious about it's history. This book isn't going on my favorites shelf or anything... yet, but I am not giving up on it. I also must say that I am very new to fantasy-type genres which may be influencing my initial opinion a lot. It wasn't a genre I am super comfortable with (and yes, I totally missed romance for the week it took me to read this!).

Oh, and one more thing, I haven't read Game of Thrones, so I can't comment on that comparison, but where in the world as anyone got Hunger Games out of this? Is it because the slaves are called "tributes" and picked from a "lottery". Because anything Hunger Games began and ended there for me... (Just curious!)

Email ThisBlogThis!Share to TwitterShare to FacebookShare to Pinterest
Labels: Adult, Erika Johansen, Fantasy, The Queen of the Tearling 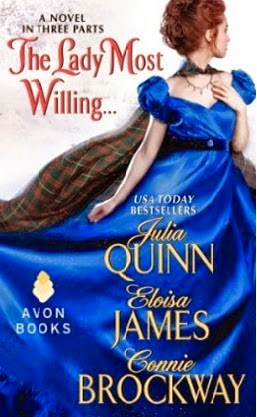 
Step into the glittering world of Regency and prepare to have your hearts warmed by Julia Quinn, Eloisa James and Connie Brockway...
During their annual Christmas pilgrimage to Scotland to visit their aged uncle in his decrepit castle, the Comte de Rocheforte and his cousin, Earl of Oakley, are presented with unique gifts: their uncle has raided an English lord's Christmas party and kidnapped four lovely would-be brides for his heirs to choose from ...as well as one very angry duke, Lord Bretton. As snow isolates the castle, and as hours grow into days, the most honourable intentions give away to temptations as surprising as they are irresistible.

I am still very new to historical romance, this being only my second novel in the genre, but I can see where people get hooked. This was such a cute, fun, little story! This is set up to be a "novel in three parts" but they each flow into each other so nicely. And because I am so new this genre, I would not have been able to tell where one author began and one ended if there wasn't a character shift.

So basically, there are four single women and four single men trapped in a cold castle in the middle of a huge snowstorm. Hmm... I wonder what could possibly happen next? I know I already said it, but "fun" is the best way to describe what ensues. This story had me smiling the entire time as I was quickly flipping pages.

I am very happy with each other couple pairings... which I won't outright state because it was enjoyable for me to find out while reading. Each story was truly equal and I can not say I liked any one more than another. (But maybe the second one just a small, tiny, tad-bit more; but only because the female main character was one of my faves!) I will definitely be looking forward to reading the other collaboration: The Lady Most Likely and other books by all three of these authors. (I have read and loved The Duke and I Julia Quinn; my only other historical romance!)

4 STARS
A very enjoyable "in one sitting" read 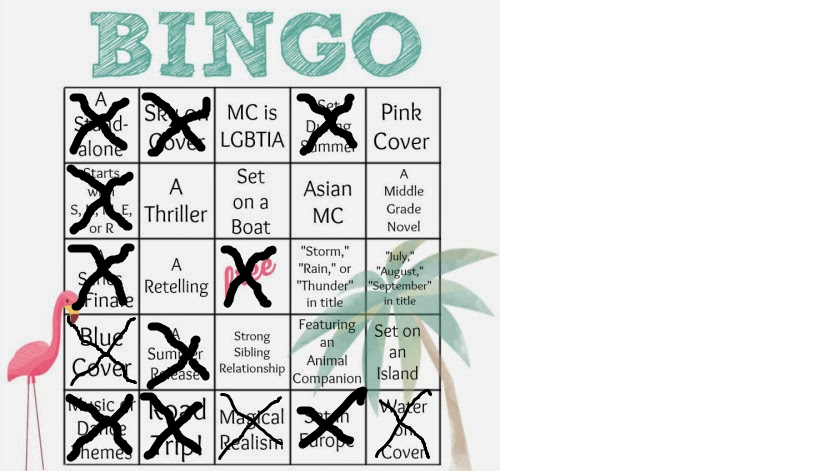 Bingos: Two!
Set in Europe: The Taming of the Rogue by Amanda McCabe   Read: 7/5/2014
A Summer Release: The Queen of the Tearling by Erika Johansen  Read: 7/21/2014
A Stand-Alone: A Death-Struck Year by Makiia Lucier
Road Trip: One Plus One by Jojo Moyes
Set During Summer: The Summer I Turned Pretty by Jenny Han
Series Finale: We'll Always Have Summer by Jenny Han
Sky On Cover: Kiss of Deception by Mary E. Pearson
Music or Dance Themes: Sonata For a Scoundrel by Anthea Lawson
Starts With E: Envy by Anna Godberson
Blue Cover: I Married the Duke by Katharine Ashe
Magical Realism: Landline by Rainbow Rowell
Water on Cover: The Truth About Faking by Leigh T. Moore
Posted by Unknown at Monday, July 07, 2014 No comments:

Email ThisBlogThis!Share to TwitterShare to FacebookShare to Pinterest
Labels: Challenges 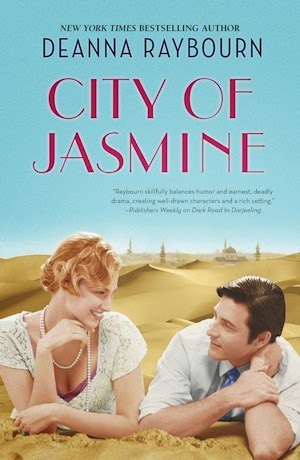 
Set against the lush, exotic European colonial outposts of the 1920s, New York Times bestselling author Deanna Raybourn delivers the captivating tale of one woman who embarks upon a journey to see the world—and ends up finding intrigue, danger and a love beyond all reason.
Famed aviatrix Evangeline Starke never expected to see her husband, adventurer Gabriel Starke, ever again. They had been a golden couple, enjoying a whirlwind courtship amid the backdrop of a glittering social set in prewar London until his sudden death with the sinking of the Lusitania. Five years later, beginning to embrace life again, Evie embarks upon a flight around the world, collecting fame and admirers along the way. In the midst of her triumphant tour, she is shocked to receive a mysterious—and recent—photograph of Gabriel, which brings her ambitious stunt to a screeching halt.
With her eccentric aunt Dove in tow, Evie tracks the source of the photo to the ancient City of Jasmine, Damascus. There she discovers that nothing is as it seems. Danger lurks at every turn, and at stake is a priceless relic, an artifact once lost to time and so valuable that criminals will stop at nothing to acquire it—even murder. Leaving the jewelled city behind, Evie sets off across the punishing sands of the desert to unearth the truth of Gabriel's disappearance and retrieve a relic straight from the pages of history.
Along the way, Evie must come to terms with the deception that parted her from Gabriel and the passion that will change her destiny forever...

This was my first novel by Deanna Raybourn and certainly will not be my last. This was such a fun, adventurous book!

We begin the story with aviatrix, Evie Starke, preparing to leave on the last part of her tour (with adorable Aunt Dove and her funny little parrot in tow). Her plans are interrupted, however, when a bit of evidence suggests that her dead husband may actually be alive and in Damascus. So off to Damascus they go!

I highly enjoyed Raybourn's descriptions of Damascus, the desert, and all the historical and cultural details that she throws in. The many eclectic and quirky characters also play a huge role in making this a very enjoyable story.

It takes (what felt like) quite a while to get to Evie and Gabriel together, but once they do it is worth the wait. I loved the interaction between these two and their scenes together were my favorite. I decided to label this historical fiction though, rather than historical romance, because I felt like any romance really took a backseat to a primarily adventure story. I love my romance, and I really don't non-love-story books, but I didn't miss it here. This book still really worked for me.

There is also a prequel novella called Whispers of Jasmine which I highly recommend if you enjoy City of Jasmine. It is my strong suggestion that you read the prequel AFTER the main novel. It gives a lot of mystery information away. The prequel really adds to the romance between Evie and Gabriel, however, if you read it second.

4 STARS
A very enjoyable book with a beautiful setting.
Posted by Unknown at Monday, July 07, 2014 1 comment: